World Premiere concerts of CRAZY COLD BEAUTIFUL took place on FRIDAY, FEBRUARY 5 at Bethlehem Lutheran Church in Grand Marais, and on SATURDAY, FEBRUARY 6th at Sacred Heart Music Center in Duluth.
Concert number one • Bethlehem Lutheran Church in Grand Marais. The Stonebridge Singers Drum, from Grand Portage, joining us as people get settled in their seats. 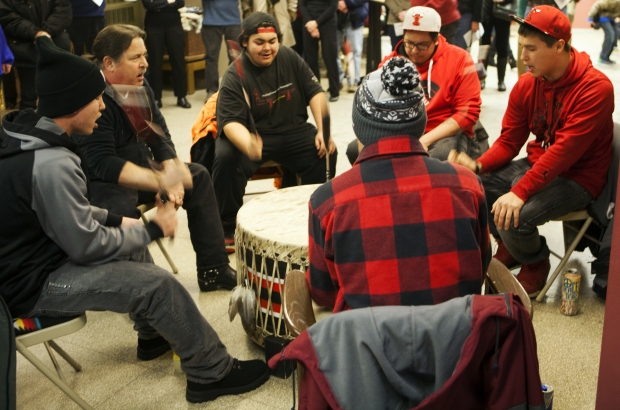 They continued, honoring us with one final song before CRAZY COLD BEAUTIFUL begins. I can’t imagine a better first performance of this song cycle. 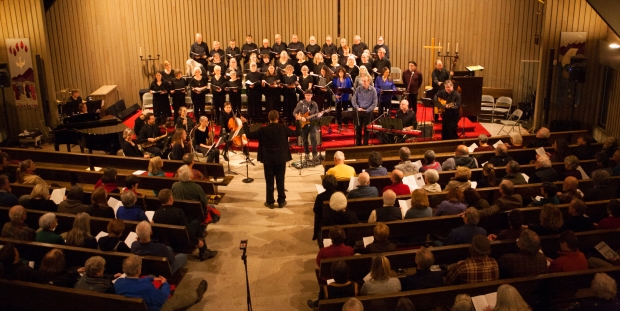 The Cook County community came out in force to hear the music. They gave a warm and emotional, enthusiastic response – adding some fantastic anecdotes afterward. An evening filled with loveliness. Gratitude to the Borealis Chorale and Orchestra one and all, to Bill Beckstrand, and to Take Jack for so beautifully and thoughtfully bringing this music into the world. After the concert we returned to our hotel for drinks and a late microwaved dinner and were treated to a visit and some much-appreciated animated storytelling from our friend – musher Arleigh Jorgenson. The words in song #13  in the cycle – “The Most Important Thing” – were spoken by Arleigh during an interview with Mark Ostazeski for his educational blog on John Beargrease.

Concert number two • SATURDAY, FEBRUARY 6
An early morning goodbye to Grand Marais. A drive to Duluth to set up for our second concert at the beautiful Sacred Heart Music Center in Duluth. 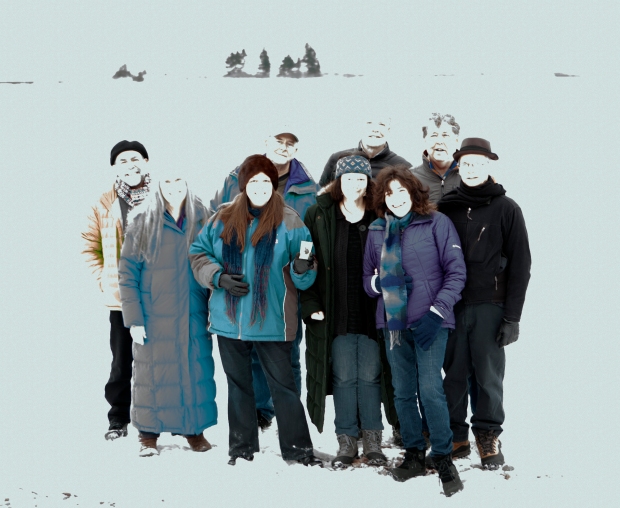 BCO arrived around noon. A yummy lunch was offered for all, kindly coordinated by Arno Kahn and Chris Bowman–thanks so very much! In some ways the concert was even stronger this time around, as is often the case. If you look closely here you can see our friend Natasaha Haugnes over to the left with her hand on the blue drum. Natasha flew out from California with her son Oliver so that they could hear the music and then, due to a somewhat mysterious disappearing incident involving the drummer, was roped into joining us. So she (and Oliver) went mushing early Saturday morning, drove 2 hours to Duluth, stepped out of her car and onto the throne. Natasha – you rock! Here is a link also to a (reverberating but decent) video from this concert of the first song in the cycle, “The One Who Stayed.” 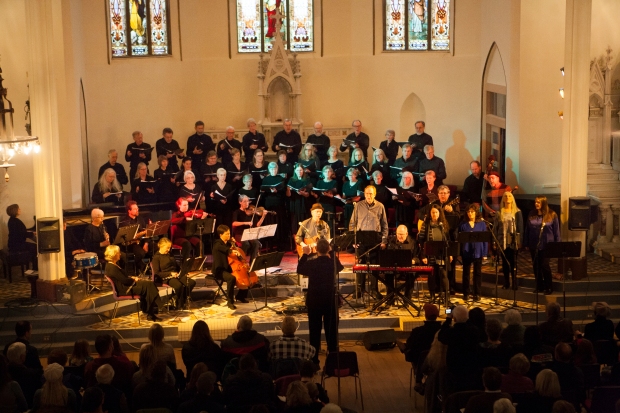 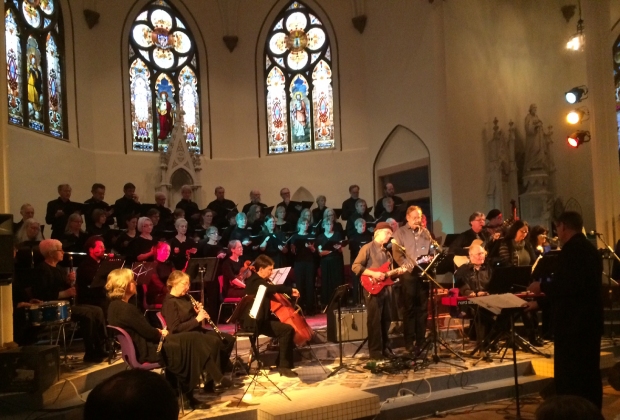 And here we are joined by students from Hermantown Elementary School, singing “Without Those Dogs” directed by Jerry Kaldor. These kids knocked off many socks. Fabulous.  Thanks you guys! 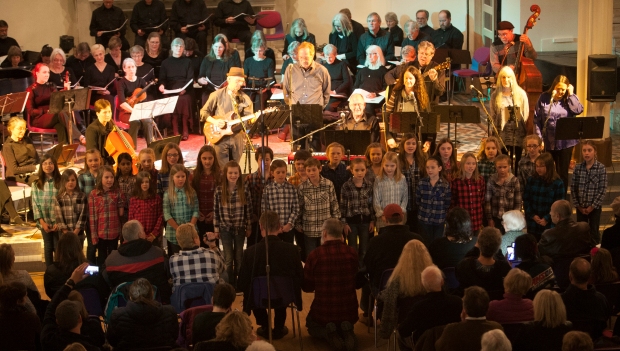 And, thank you to the McKnight Foundation and The American Composers Forum and thank you Minnesota!
Next up – west coast premiere concerts on March 19th, directed by Omid Zoufonoun, with Take Jack and Orchestra joined by Sonoma County’s Kitchen Choir, directed by Sarah Saulsbury.

Bill took this photo – so you can see Ron Smith here with us on the far left – thank you Ron for so many dynamite photos. 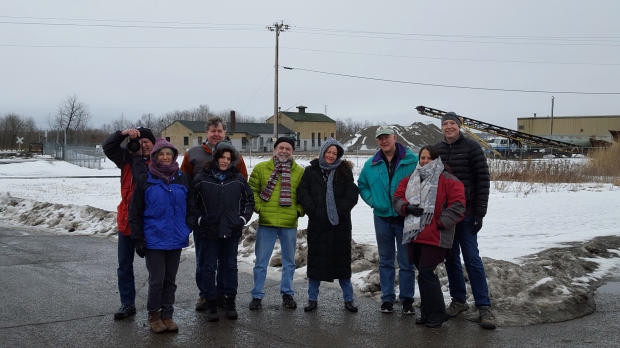 Here’s to the dogs! 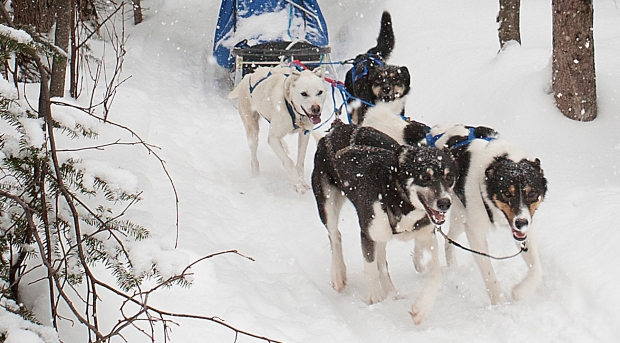 This trip out I was joined by the other members of  Take Jack, the collaborative ensemble from Sonoma County I have been with since the group formed in 2010. We were joined by Ron Smith – fantastic photographer, actor and Co-Jack extraordinaire. Here is a bit about our time together during the week leading up to the first CRAZY COLD BEAUTIFUL concert.

FRIDAY JANUARY 29
Take Jack arrives, Minneapolis. Ten of us with all of our gear and a rental bass from All Strings Attached snug into 3 behemoth rental SUV’s and head to Duluth. 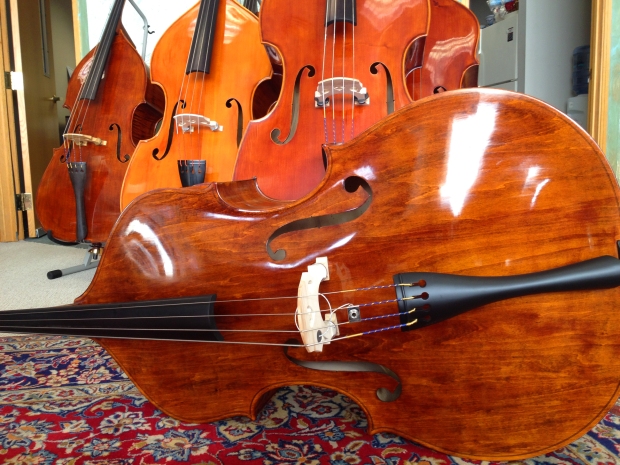 Temperatures dropping. Snow falling. Good news for the marathon! In the Star Tribune today, spotted at an airport kiosk upon arrival, an incredibly thoughtful article about the project, written by Katy Read:
http://www.startribune.com/music-written-for-beargrease-dog-sled-race-inspired-by-north-country/366874181/

SATURDAY JANUARY 30
Early start heading toward Grand Marais with a stop in Beaver Bay to visit the mushers with their teams getting Vet checks in preparation for the 2016 JBSDM, and to pay our respects at the gravesite of John Beargrease. 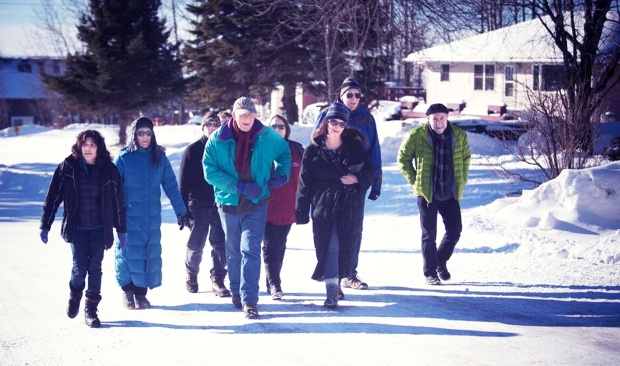 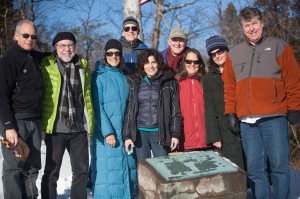 Midday arrival at the Bethlehem Lutheran Church in time to join the 47 members of the Borealis Chorale and Orchestra for lunch and an afternoon rehearsal. Fantastic to see everyone again. Brilliant singers and musicians, stellar people all ‘round and Bill Beckstrand is a truly gifted director, musician, composer and well… plus – he’s just one of the people you’d most want to meet in a lifetime. 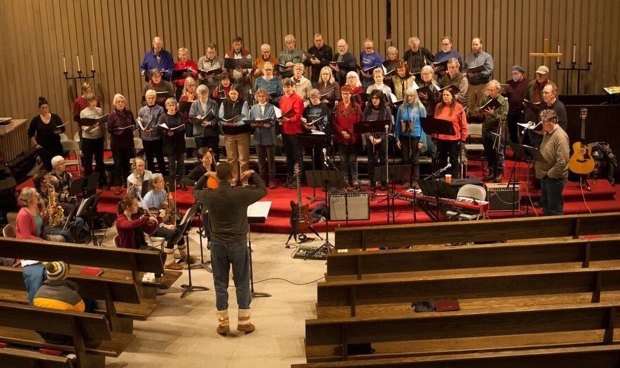 (Just want to say to all you Giants fans who have sung the SSB in SF at AT&T Park on a sunny spring day? Try this.) … and then suddenly the lyrics we’ve been rehearsing for the past several months (in this instance words from musher Frank Moe) come alive as the countdown begins and the teams take off  “… Nine, eight, seven, six… like a shot from a gun… smokin’ down the chute…” Here is Nathan Schroeder at the start line. 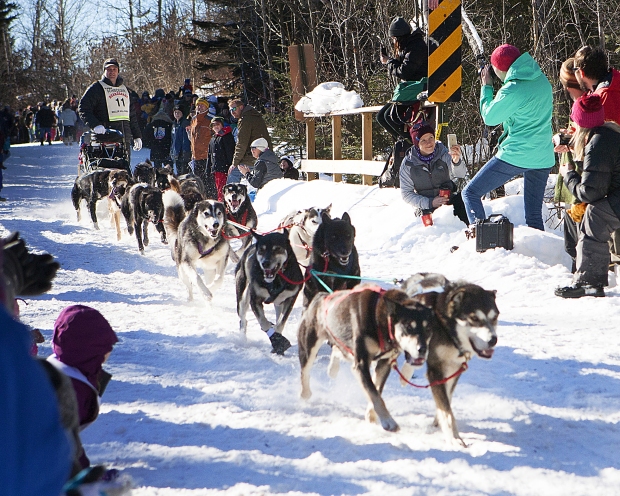 Photo • Ron Smith.
We made stops later in the day and evening at Finland and Sawbill checkpoints.

MONDAY February 1
Rehearsal number two with the BCO. Joined this time by the orchestra including Yvonne Caruthers on cello – featured in several of the pieces. 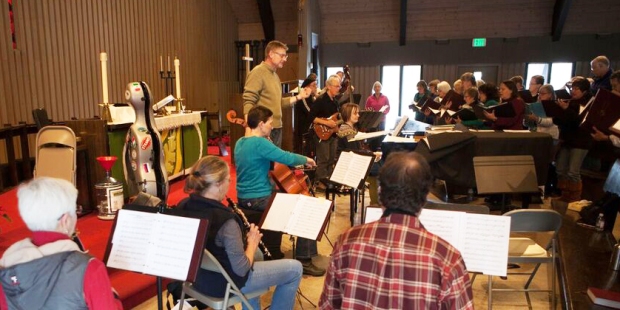 TUESDAY FEBRUARY 2
Take Jack stops in for an hour at WTIP radio to talk with Will Moore and sing a bit on Sidetracks. 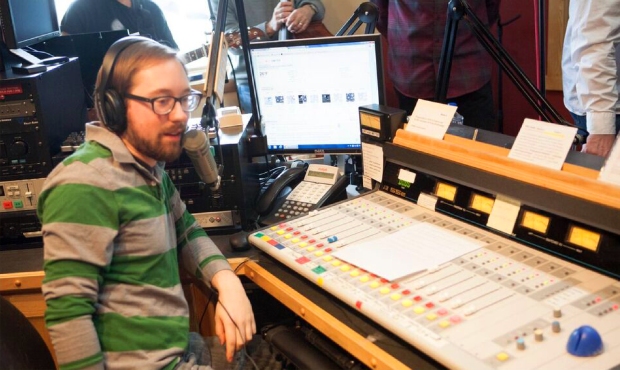 Here’s a link to the show. http://www.wtip.org/take-jack-live-sidetracks

WEDNESDAY FEBRUARY 3
A visit with the kids at Sawtooth Elementary School to sing through “Without Those Dogs” in Kerri Bilben’s  inspiring music class. 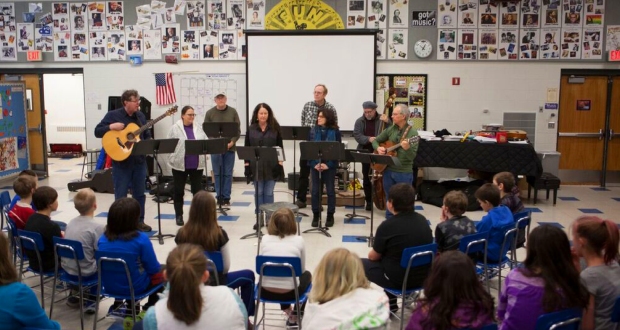 Evening concert with TONE BENT at Papa Charlie’s in Lutsen. Much appreciation for Jerry on sound! 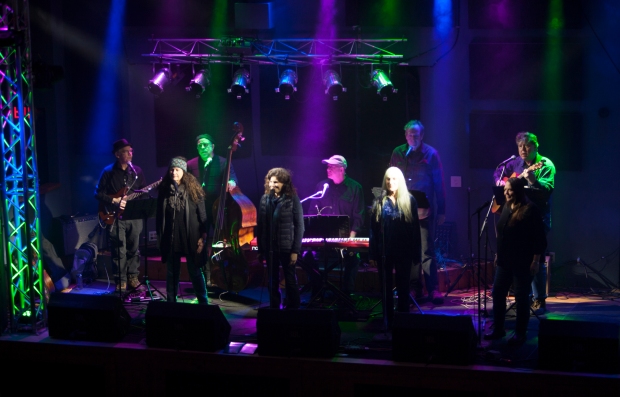 THURSDAY FEBRUARY 4
The Jacks go mushing with Matt Groth of Grand Marais. So much I could say here but here’s the deal. Just go. Try it. Really. https://www.facebook.com/grandmaraissleddogadventures/ 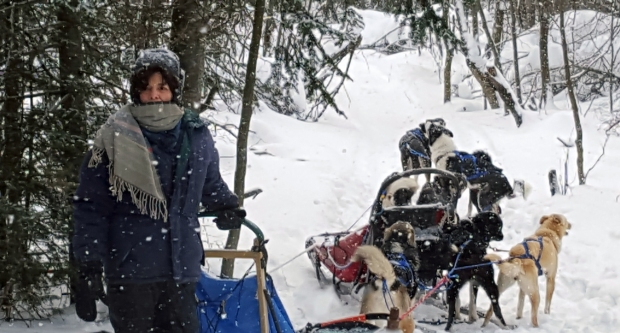 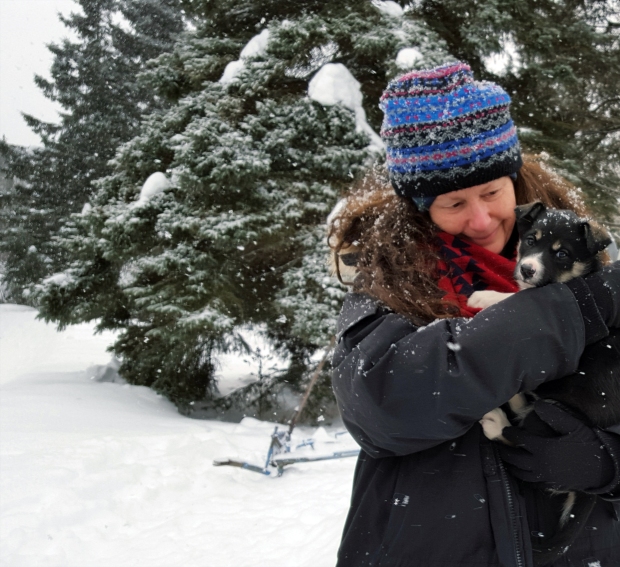 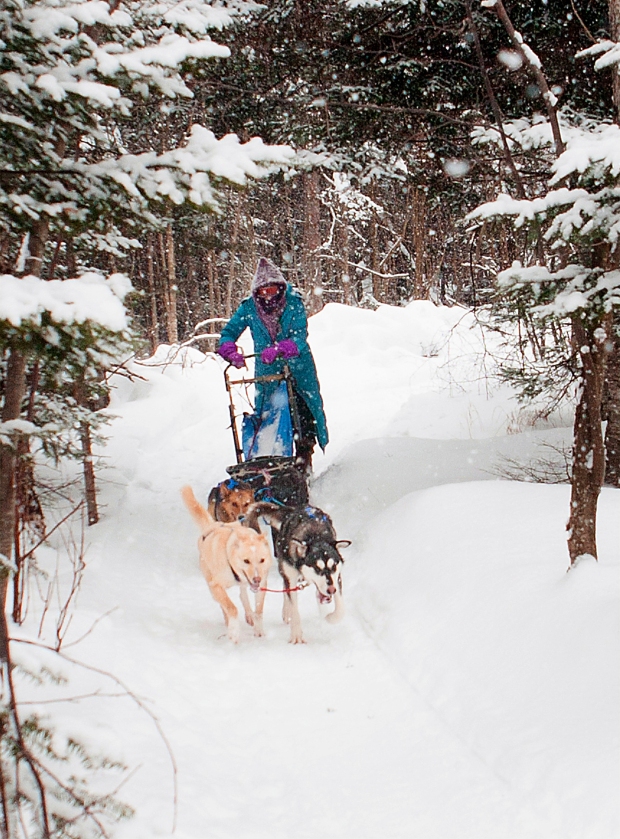 FRIDAY FEBRUARY 5
At long last the day of the first concert has arrived. We do one final rehearsal at the Bethlehem Lutheran Church where Pastor Mark Ditmanson has so generously supported the project, allowing our keyboard, amps, speakers, and additional gear loaned to us by the North Shore Music Association, to remain set up all week long. Thank you Grand Marais for your kind welcome! 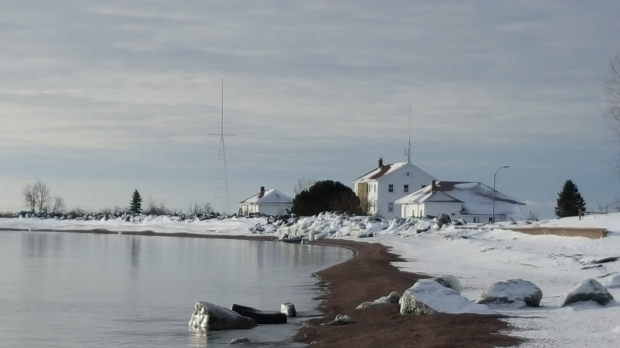