DEVIL TRACK • NIGHT
About 7 hours after leaving Trail Center, teams began pulling in to the next checkpoint – Devil Track. Again this was now dark of night so, from the vantage point of someone awaiting arrivals, you’re standing down at the edge of Devil Track Lake watching a tiny point of light approaching from across a broad expanse of horizon. Behind you is the ever-present bonfire (these people know how to make a fire!) and the Devil Track Lodge, lit-up and welcoming. 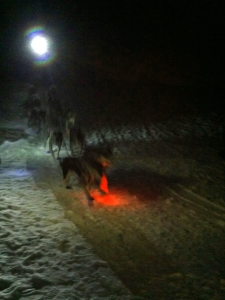 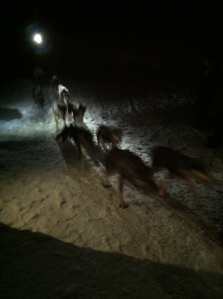 As the dogs come to a stop the mushers are asked to hand over their mailbags. I think I forgot to mention this part earlier. Before the start of the race all mushers were sworn-in as official mail carriers for the duration of the race. The same oath that I imagine John Beargrease had to recite back in about 1880?         “I do solemnly swear (or affirm) that I will support and defend the Constitution of the United States against all enemies, foreign and domestic; that I will bear true faith and allegiance to the same; that I take this obligation freely, without any mental reservation or purpose of evasion; and that I will well and faithfully discharge the duties of the office on which I am about to enter.”      They were each given a mailbag to carry, filled with letters one may purchase through the John Beargrease Sled Dog Marathon website. (these are then addressed and returned in time to be carried during the race) These are great keepsakes and will reach their destinations with a special stamp saying the letter was carried by sled dog during the race. This is not a great shot but you can see the size of the mailbag here – being given to  revered musher Jamie Nelson, during opening ceremonies:

And this next image is of Nathan Schroeder handing over his mailbag at Devil Track. Nathan was the JBSDM winner last year and went on to the Iditarod where he received the Rookie of Year Award.

From Devil Track the mushers are headed back down the loop and by then I really had to go grab a few hours of sleep. When I woke up I decided to drive on to the Finland Checkpoint (missing the return swing through Sawbill) so I could intercept the leading teams again. It was actually difficult to keep up with these guys. They were flying! Here are some shots of the trail coming in to Finland from a musher’s point of view. The glow sticks that are hanging from trees as you approach the checkpoint: 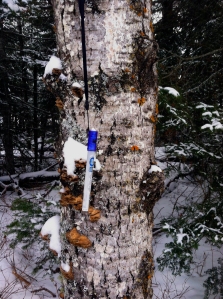 The signs for unsuspecting cross country skiers or the like: 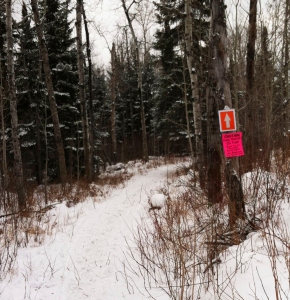 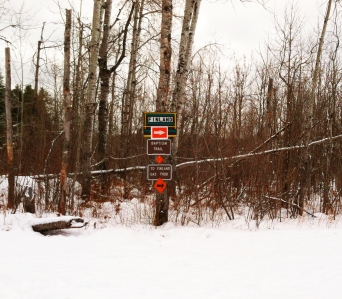 Here’s a YouTube of Frank Moe coming in to the Finland Checkpoint. And, a still:

When the dogs are resting – if you inch up too close to take a picture – a handler will often suddenly appear and ask you to stay back so that the dogs can rest. Pretty great of them, handlers are awesome. Letting sleeping dogs lie: